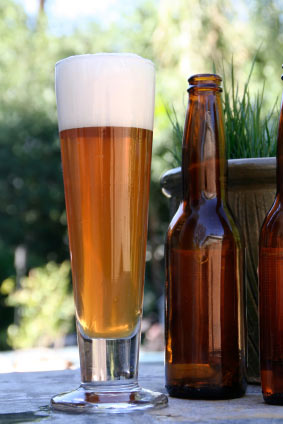 The basic ingredients of beer are water; a starch source, such as malted barley, able to be fermented (converted into alcohol); a brewer’s yeast to produce the fermentation; and a flavouring such as hops. A mixture of starch sources may be used, with a secondary starch source, such as corn, rice or sugar, often being termed an adjunct, especially when used as a lower-cost substitute for malted barley. Less widely used starch sources include millet, sorghum and cassava root in Africa, potato in Brazil, and agave in Mexico, among others. The amount of each starch source in a beer recipe is collectively called the grain bill.

The process of making beer is known as brewing. A dedicated building for the making of beer is called a brewery, though beer can be made in the home and has been for much of its history. A company that makes beer is called either a brewery or a brewing company. The purpose of brewing is to convert the starch source into a sugary liquid called wort and to convert the wort into the alcoholic beverage known as beer in a fermentation process effected by yeast.

The first step, where the wort is prepared by mixing the starch source (normally malted barley) with hot water, is known as “mashing”. Hot water is mixed with crushed malt or malts (known as “grist”) in a mash tun. The mashing process takes around 1 to 2 hours, during which the starches are converted to sugars, and then the sweet wort is drained off the grains. The grains are now washed in a process known as “sparging”. This washing allows the brewer to gather as much of the fermentable liquid from the grains as possible. The process of filtering the spent grain from the wort and sparge water is called wort separation. The traditional process for wort separation is lautering, in which the grain bed itself serves as the filter medium. Some modern breweries prefer the use of filter frames which allow a more finely ground grist. Most modern breweries use a continuous sparge, collecting the original wort and the sparge water together. However, it is possible to collect a second or even third wash with the not quite spent grains as separate batches. Each run would produce a weaker wort and thus a weaker beer. This process is known as second (and third) runnings. Brewing with several runnings is called parti gyle brewing.

The sweet wort collected from sparging is put into a kettle, or “copper”, (so called because these vessels were traditionally made from copper) and boiled, usually for about one hour. During boiling, water in the wort evaporates, but the sugars and other components of the wort remain; this allows more efficient use of the starch sources in the beer. Boiling also destroys any remaining enzymes left over from the mashing stage. Hops are added during boiling as a source of bitterness, flavour and aroma. Hops may be added at more than one point during the boil. The longer the hops are boiled, the more bitterness they contribute, but the less hop flavour and aroma remains in the beer.

After boiling, the hopped wort is now cooled, ready for the yeast. In some breweries, the hopped wort may pass through a hopback, which is a small vat filled with hops, to add aromatic hop flavouring and to act as a filter; but usually the hopped wort is simply cooled for the fermenter, where the yeast is added. During fermentation, the wort becomes beer in a process which requires a week to months depending on the type of yeast and strength of the beer. In addition to producing alcohol, fine particulate matter suspended in the wort settles during fermentation. Once fermentation is complete, the yeast also settles, leaving the beer clear.

The most common method of categorizing beer is by the behaviour of the yeast used in the fermentation process. In this method, beers using a fast-acting yeast which leaves behind residual sugars are termed “top-fermented” and referred to as Ales. Beers using a slower-acting yeast, fermented at lower temperatures, which removes most of the sugars, leaving a clean, dry beer, are termed “bottom-fermented” and referred to as Lagers.

Bottom fermented beer. This is the “style” of beer is the result of the growth of national breweries, and their ability to brew a beer that appeals to the most people possible, at a competitive price. It is brewed with significant quantities of grain other than barley malt; a slightly sweet, lightly hopped, straw colored, very effervescent beer.

A top fermented beer. Ale is similar to lager, but usually richer, heavier and more complex. Ale can vary from blond to black in color.

This style is a light-straw colored, full bodied, lagered, bottom fermented beer originating from Pilsner, Czechoslavakia. Pale to golden, elegantly dry and crisp. The most copied and widely brewed beer style in the world.

This top-fermented classic ale style offers a deep, rich brown or ruby color with a malty, very lightly hopped flavor. Ordinary bitter is low to medium in alcohol content, while extra special bitter is medium to high. True bitter is only lightly carbonated.

India pale ale, so named because it had to endure long sea voyages from breweries in England to India during British rule, had to be a high gravity, well hopped brew to enable it to last the voyage and not spoil. Pale or golden to deep copper in color. Quite hoppy with nuances of fruit and/or flowers.

Brown ale is a traditional British, top fermented ale. Flavor and color are very much like a pale ale, but sweeter and darker with a light body.

Amber to red to dark brown in color. is is a strong (high alcohol) brew made with Scottish malted barley. Less hoppy than English brews, there are hints of caramel and, sometimes, a slight tang of smoke in the flavor. Usually sweet and rich with a creamy head.

Also called, Old Ale, this strong (high alcohol) brew is particular for its dark color (almost opaque) and a very sweet flavor that masks the heat of an alcohol content that can reach 6-8% by volume.

Barleywine is a very dark, almost opaque ale. A strong ale,  this is the most alcoholic style of beer.  The addition of a healthy amount of hops forms a powerful flavor triad of sweet malt, bitter hops, and warm alcohol. Should be sipped like brandy and can improve with age.

This style is fermented with bottom fermenting yeast and is “lagered” (aged) for at least a month. A full bodied, stronger richer lager.

A blend of three ales (old, new and weak). This is a dry, roasty brew that is darker than amber, and lighter than “stout”. Usually very hoppy and malty. Strong in flavor and alcohol content.

Very dark to black. Tastes range from charcoal to molasses with a malty sweetness to a bitter sweetness. Serve warm. Stout was born from porter.

A mixture of stout or porter with a light or pale ale. A layered drink when made from scratch, a mixture when bottled.

Deep dark red to black with a rich creamy head, roasty with a medium to high hop flavor balanced by hint of coffee and/or caramel.

A stout with any amount of oatmeal added. A heavy, sweet beer.

Top-fermented beer made with wheat malts. Pale to straw to deep copper or brown.

A Belgian style referred to tase wise being horsey, sweaty or tart. Can range from well-carbonated to almost flat, with a slightly sour aftertaste.

This ale is dark brown with a ruby hue, is fruity and heavily sedimented and is strong. True Trappist is brweed at Trappist monasteries in Belgium under centuries-old guidelines.

An unfiltered wheat beer, cloudy and bottle-conditioned with yeast. Tastes of clove or citrus are prevelant. Pour to evacuate the sediment out of the bottom; squeeze a lemon wedge into the creamy head.

Originates from Belgium and is a kind of wheat beer. Color can vary from pale to golden, with a creamy head. Taste is usually a contrast of citrus and spices like coriander, nutmeg and/or clove.

Amber to pale copper. Very malty and medium to strong in potency. Traditionally, when the last of the winter season’s beer was brewed each year in March, it was a made to be a little stronger than usual, so that the alcohol content would preserve it through the summer and meant to be imbibed in late September and early October.